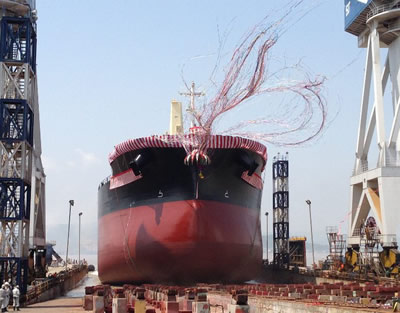 TESS45BOX is a new developed ship subsequent to the TESS45 45,000-ton bulk carrier, of which a total of 69 vessels had been built since the 1990s. She covers the diversified patterns of calling at port for bulk carriers ranging from 37,000 to 45,000 tons. At 183 meters in length, this new model is 3 meters shorter than the TESS45 (45,000 ton type bulk carrier), and this more compacted size enables to satisfy of more flexible combinations of port calls. A new box shape (for box-shaped cargo) has been adopted in this model, to enable to fix to the requirement of high efficient loading and shipment not only of bulk cargo such as grain and coal but also of square-shaped cargo such as pulp and steel products such as pipes. This increases value for customers, such as by making it easy to load and unload cargo through the wide access area by increasing of the efficiency in cargo handling and maintenance. Also, various improvements in hull shape and environment devices over the 30 year development of the TESS※1 Series have been introduced, and these have resulted in a more energy-saving vessel, which has about 13% higher fuel efficiency than the one of TESS45.

TESS45BOX was developed and reintroduced to the market in 2011, and seven orders of this type ship have been received so far (as of the end of April 2014). The first vessel to be built is one of three that were ordered in April 2012 by an amicable overseas ship owner. This ship was successfully launched in the view of the ship owner and representatives of Tsuneishi Group (Zhoushan) Shipbuilding at 11:25 AM on April 30, and will be completed in early June 2014. Other two more vessels of the same type are under construction at Tsuneishi Group (Zhoushan) Shipbuilding and are scheduled to be completed in 2014.

*1 Tsuneishi Economical Standard Ship. The first ship in this series was a TESS40 (40,000 ton type bulk carrier) built in 1984. After that, variation was increased in the TESS45, TESS52, and TESS58 models, and in January 2012 the 300th ship in the Handymax Series was completed.