TSUNEISHI Holdings Corporation (Head Office: 1083 Tsuneishi Numakuma-cho, Fukuyama-city, Hiroshima, CEO: Katsushige Kambara) has developed a new style of living quarters, called “CREDOS,” for mid-size cargo carriers. We’re now ready to announce the concept and its basic outline. After careful consideration of the living quarter’s functions, the traffic of sailors through the quarters and customer feedback, we have developed a concept that provides the best comfort in Tsuneishi style. The concept’s slogan is “Functional space combining efficiency, comfort and safety.” In line with this new approach, CAMSARMAX, HANDYMAX and CAPE size bulk carriers are currently being designed.

We separated a cargo carrier into 3 stations, the “Hull Station”, “Power Station”, and “Living Station,” and are creating the best design for each station. The result will be unique cargo carriers, offering both unprecedented customer satisfaction and a contribution to society through these special products. During the course of the project, we arrived at the core idea of living quarters as “Space in which sailors may live safely and comfortably during voyages.” The new Living Station was developed based on this concept.

Based on extensive feedback from customers and ship owners, we considered their needs and analyzed sailors’ daily activities and mental well-being referring to their nationalities and living environments. As a result, we determined that the living station, once considered a space for both work and living, should be separated into discrete “work space”, “living space” and “communication space,” and that enhanced efficiency, comfort, and safety should also be pursued.

We analyzed people’s lines of motion and eliminated unnecessary space. Additionally, to give a more spacious feeling, the ceiling was raised from 2,100mm to 2,400mm. This created a liberating and functional space.

2. Use different colors depending on the purpose of the space.

Sign colors used for hallways and staircases vary according to deck, so that sailors can immediately recognize which part of the living station they are in. This allows sailors to move around efficiently and safely without trying to remember where they are. It’s also thought that such measures help prevent mistakes by sailors who may be panicked by an emergency. Additionally, using bright colors for the first steps in of staircases decreases falls and missteps.

Colors affect people mentally and physically. Their characteristics and effects are utilized in each room. For example, blue calms people and enhances concentration, so blue is used in office rooms and the wheelhouse. On the other hand, in relaxation spaces such as the lounge and smoking rooms, warm colors foster a slowed perception of time. By lessening stress and clearly separating work and private time, life on water will become more comfortable.

3. Use light to create different spaces.

Functionality can be increased by an appropriate use of light in the various living and working spaces.
For workspaces such as the wheelhouse and office, crisp white light is used to increase alertness and concentration. For relaxation spaces such as living rooms and communication rooms, a warmer white is used. Additionally, brightness varies from room to room depending on the space’s intended purpose.

4. In all living rooms, sailors can sleep in two directions. (patent pending)

In all living rooms, beds and sofas are designed so that sailors can sleep either in the direction of travel or perpendicular to that direction. Usually a ship rolls sideways against the traveling direction, but when the weather is bad, it pitches up and down. Sailors can change their sleeping positions to compensate, decreasing physical stress and allowing greater comfort. This patent is now pending.

For some big rooms including the wheelhouse, this layout has already been introduced, but there was no ship in which this feature was provided in all rooms. We believe good sleep means safer voyages.

In former types of living spaces, some ready-made furniture was set out. But the new living room has a higher ceiling and we’ve introduced system storage space. Also, by utilizing dead space including that under beds and sofas, storage capacity has increased by 1.8 – 1.9 times compared to earlier spaces.

Layout is carefully determined in terms of safety and even stored life jackets and immersion suits are easily accessed. With the new layout, even a large trunk can be stowed in what was once dead space.

We created a mock-up of the cabin and kitchen for a test of comfort and usability. This will also serve as a research center for further effort to increase comfort in the living station. The mock-up is just for testing. Actual specifications aboard various vessels will result in living stations that may be different from the mock-up.

Currently, bulk carriers of KAMUSARMAX, HANDYMAX, and CAPE sizes are being designed to have this “CREDOS” in their living stations. In the future we plan to introduce “CREDOS” to other ship types, including AFRAMAX tankers.

What does “CREDOS” mean?

This name was made up from the words“Create Dimension of Space.” We will consolidate our long experiences and technology without being a slave to convention to create a real TSUNEISHI’s original. We’re working daily toward the realization of our goals. 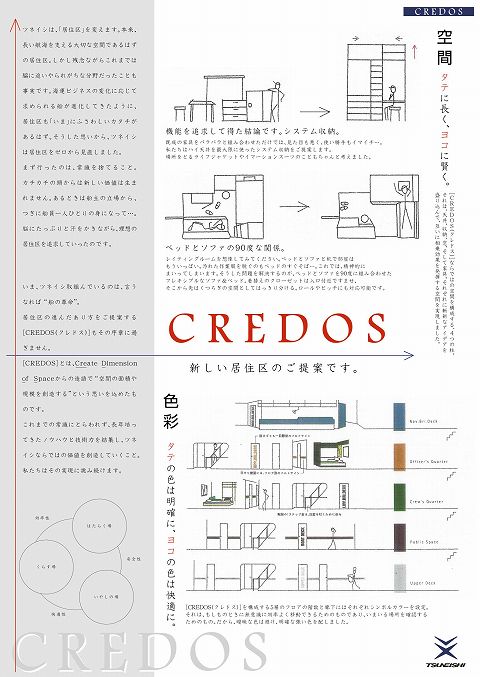