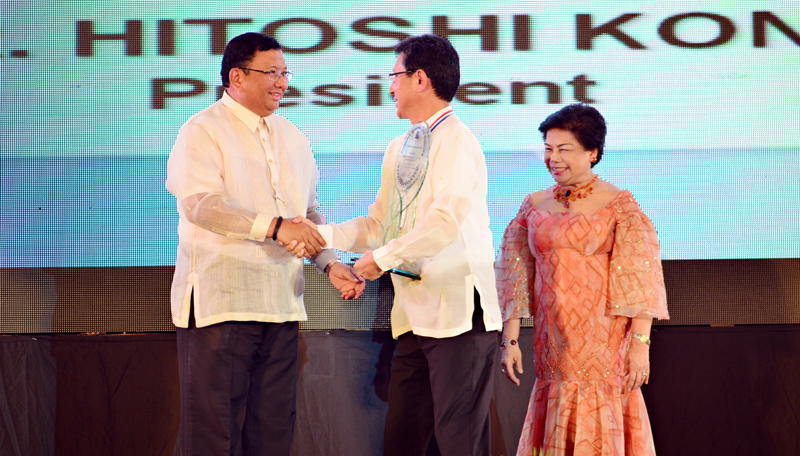 Tsuneishi Heavy Industries (Cebu), Inc. (THICI), one of the leading shipbuilders in the world, received the Hall of Fame Award for Outstanding Community Projects from the Philippine Economic Zone Authority (PEZA) for three years (2005; 2011; 2013) during the Investors’ Recognition Night 2014 on April 24 at the World Trade Center, Manila.

The company also received the Outstanding Exporter in the large enterprise category.

The PEZA Outstanding Community Project Award honors organizations that exemplify best practices through their corporate social responsibility initiatives with substantial effects to its community while the Outstanding Exporter Award honors companies for their continued contributions to the growth of the Philippine economy, based on total export value, growth and net trade balance.

THICI President Hitoshi Kono noted, “THICI is a strong advocate of Corporate Social Responsibility (CSR) and sees it as a pre-requisite for building a successful enterprise. This achievement would not be possible if not for the efforts of our employees together with the local government units. We will continue giving back to the community as a way of saying thanks for their unending support.”

THICI, established in 1994, has been involved in the local communities apart from generating employment by expanding its business for its commitment to improving the local people’s living standards through other contributions including education, health care, community development and enterprise development.

Previous awards were Outstanding Employer in 2010, Outstanding Exporter in 2011 and 2012, and Environmental Performer in 2003.

■ About Tsuneishi Heavy Industries (CEBU), Inc.
A wholly-owned subsidiary of Tsuneishi Holdings Corporation (head office: Fukuyama, Hiroshima Prefecture), which in 2014 is celebrating its 20th year of business on Cebu Island in the Philippines. This company builds about 20 vessels per year, centered on the 30,000 ton to 180,000 ton class bulk carriers, and is one of the top shipyards in the Philippines, employing over 10,000 people directly or through cooperative companies.