The “Kids Craft Challenge Camp” was held. Parents and Kids have a ball making crafts!

An overnight craft class camp “Kids Craft Challenge Camp” was held on November 22nd and 23rd at Sanwa no Mori Resort & Conference Center. The class was designed by TSUNEISHI Holdings Corporation and the Engineering Department of Fukuyama University, with the goal of introducing parents and kids to comparatively difficult crafts, learning the pleasure of making things and gaining hands-on tips, while having a chance to communicate together.

39 people from Hiroshima prefecture and beyond participated in the camp. Students from Fukuyama University’s Engineering Department gave them instructions for making an amphibious car which automatically avoids collisions with other cars. They learned basic electric circuit-making techniques, using soldering iron, longnose pliers, and nippers. One of the participating kids said, “Soldering was the most difficult part in two days camp. But now I’m used to handling a soldering iron, so next time I’ll try to make something using a soldering iron without any problems.” 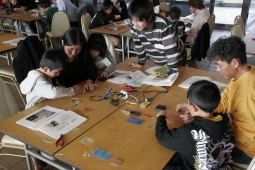 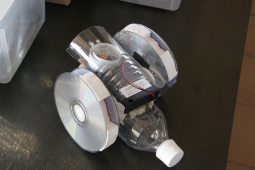