The four ordered vessels feature the latest improvements in fuel efficiency, made in 2013 in compliance with new international regulations. Reductions in both fuel consumption and nitrogen compounds contained in gas emissions are achieved by applying an engine in which fuel injection is controlled electronically rather than by the conventional mechanical method. Fuel efficiency is further improved by a proprietary propeller design with that the main engine’s output can be more efficiently converted to propulsive force. In addition, it features accommodation design in compliance with stricter regulations regarding on-board ship noise that were issued by the International Maritime Organization for chartered vessels contracted from July 2014, and there are also other improvements in the crew’s working environment. As with previous models, the accommodation is at the stern end of the ship, entirely behind the on-deck container loading space, which helps to make cargo handling operations more efficient and less time-consuming.

These four newly ordered vessels will be operated by Shanghai Haihua Shipping Co., Ltd. (HASCO), a member of the SIPG Group. HASCO is a state-owned shipping company that handles regular container transport on shipping routes between China and Japan and between China and Southeast Asia. On April 11, representatives from both of these companies were in Japan for a contract signing ceremony held at Tsuneishi Shipbuilding’s main shipyard in Numakuma-cho Fukuyama city, Hiroshima. After signing the contract, ship owner representative SIPG’s Vice President Huang Xin and Hong Kong-based subsidiary’s General Manager Gu Jianmin remarked “the high energy-saving performance of this ship model not only cuts operational costs for our maritime business, it is certain to contribute to environmental protection as well. In view of the TZS’s latest shipbuilding equipment and processes and their quality control system, we feel that everyone is enthusiastic about building the vessels. And we are looking forward to their completion.”

At the contract signing ceremony on Friday April 11 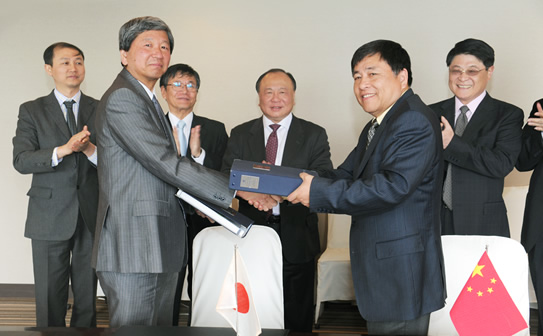 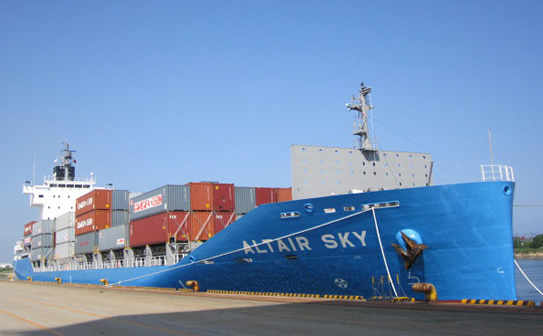 ・Equipped with “MT-FAST” multiple-wing structure that attaches to the front part of the propeller. This improves propulsion efficiency by smoothing out water flow. Co-developed in 2008 with MTI (Monohakobi Technology Institute), a Nippon Yusen Kabushiki Kaisha (NYK) Group company.

・Applied with “SEAWORTHY” system for reducing wave resistance in the bow, which allows the sea margin (for increased wave resistance) to be reduced by as much as 5%. This was jointly developed with Hiroshima University.