(1) Looking back on 2013
In 2013, a total of 51 vessels were built at the four factories in Japan and overseas; 11 fewer than the year before. On the other hand, the shipbuilding market has been gradually recovering and the depreciating yen has been providing a tailwind, such that there were 63 orders for new ships, 13 more than were received in 2012.

(2) Business Activities in 2014
Tsuneishi Shipbuilding aimed to reduce CO2 emissions in 2013 by 20% (compared to the 1990 level), and in fact achieved a 22.6% reduction for operations in calm seas. The new goal is to achieve a 40% reduction from the 1990 level by 2020, by developing ships that are not only easier on the environment but also provide superb operating profitability.

With the Tsuneishi Factory as its mother factory, Tsuneishi Shipbuilding also has tie-ups with two overseas factories (in the Philippines and China) for stronger cost competitiveness. At its total of four domestic and overseas factories, the number of vessels scheduled (completion basis) for 2014 is 56, compared to 51 in 2013.
Total sales for the shipbuilding business segment in the year ending December 2014 are expected to grow 2.9% from 2013 to reach ¥222.1 billion.

２．Shipping
(1) Looking back on 2013
Kambara Kisen continues to order mainly 80,000-ton class mid-size bulk carriers, and as of December 2013 it has increased its vessel holdings (including at subsidiary companies) to 34 vessels, up from 28 in December 2012. Many of these are time charter vessels on loan to domestic and overseas shipping companies. To further strengthen ship management, a new office is being established in India to reinforce quality assurance functions and provide IT support.

In May 2013, the liner business that links regional ports in Japan with major ports in China made a major improvement in the fuel efficiency of two 1020 TEU type container carriers, which have helped to hold down running costs.

With regard to regular container routes, while making the most of its strength in direct routes to Shanghai and other destinations, Kambara Kisen continues to expand its services in the Asia region through cooperative agreements with other shipping companies. In addition, it is coordinating an international intermodal transport system that will utilize the functions of the Fukuyama Distribution Center.
Total sales in the shipping business segment for the term ending December 2014 are forecast to reach ¥39.6 billion, up 18.6% from the previous year.

(1) Looking back on 2013
Tsuneishi Kamtecs Corporation is rolling out an M&A strategy aimed at strengthening and expanding the valuation of its waste recycling business. In November 2013, it brought under its umbrella Sunny Creation Planning, a company that is especially strong in RPF recycling, as part of its ongoing efforts to reinforce and expand its waste recycling business.
Starting to grow its business in other parts of Asia as well, in April 2013 the company established a wholly owned subsidiary (Tsuneishi Kamtecs Thailand) in Thailand.

(2) Business Activities in 2014
In addition to establishing a local subsidiary in Bangladesh in June of this year, Tsuneishi Kamtecs has launched a wastewater treatment business in Thailand, and plans to develop similar businesses in Myanmar and Laos as well. In Vietnam, under a public-private partnership, the company is in charge of a process that renders industrial waste into non-toxic ash that is then made into artificial sand.
Additionally, Tsuneishi C Values is planning to beef up its solar power generation business and its overseas sales of used automotive parts.

(1) Looking back on 2013
In July 2013, Tsuneishi Human Services began full-fledged operation of Tsuneishi Shimanami Village, which includes the Tsuneishi Field, an artificial-turf soccer field approved by the Japan Football Association, the Tsuneishi Arena gymnasium, and a lodge plus other accommodations. At the Mirokonosato Park, illumination work has begun, and the company also helped to relocate Shinshoji Hot Springs within Mirokonosato Park, which attracted over 300,000 visitors.

(2) Business Activities in 2014
In March 2014, Tsuneishi’s renovated Onomichi Uwaya Warehouse, owned by Hiroshima Prefecture, was opened for business as ONOMICHI U2, a resort complex for cycling enthusiasts, which includes a cyclist-oriented hotel, restaurant and bakery, and a Giant bike store. Beginning in April, the company will help reinvigorate the Shimanami Kaido as joint manager of the Ikuchi-jima Sunset Beach. 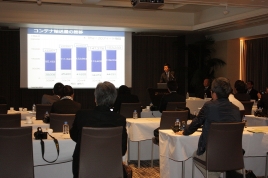