HOME > NEWS > TESS45 Sets Off Again It's been made more compact to accommodate diverse operation patterns.

TESS45 Sets Off Again It's been made more compact to accommodate diverse operation patterns. 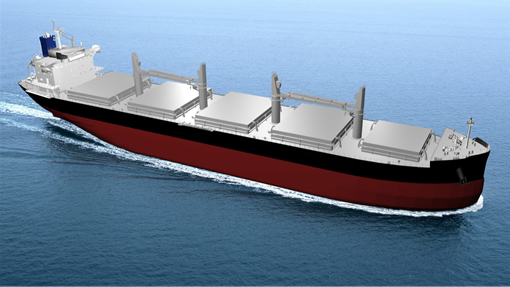 TESS45 is a successor to Tsuneishi Shipbuilding Company’s original TESS40,*1 a model developed for the demand of jumboizing Handymax Bulker by European owners at the beginning of the 1980’s. Beginning in 1984, 108 ships were built over 18 years, including TESS40 and TESS45. Since TESS52 was developed to accommodate increased worldwide sea transport, the TESS45 series was not built after August, 2001. But about 900*2 37,000-ton to 45,000-ton level bulk carriers remain in operation and we have been developing this model, anticipating a demand for replacement with the same type of ships, including TESS40 and TESS45.

TESS45BOX was built based on the TESS45, keeping a deadweight capacity of 45,000 tons but shortening the ship length to 183 meters to allow a more flexible choice of anchorage sites. By introducing the new box shape, we offer a versatile ship model suitable for transporting square-shaped cargo including pulp and steel products such as pipes as well as bulk cargo including grains and iron ore. Its box shaped hold enables easy loading and unloading of cargo and increases values for customers by improving efficiency for both cargo handling and maintenance. Moreover, to increase the profitability of operation, fuel efficiency has been enhanced by introducing our new environmental technology and improving the ship shape using knowledge acquired through the development of the TESS series *3 over 30 years.

We are now promoting this ship targeting clients not only in Japan but also overseas, and we’ve received an order for 3 ships from an amicable overseas ship owner. We plan to start building them at Tsuneishi Group (Zhoushan) Shipbuilding Inc. in 2014.