Newly Developed Ship 「TESS98」The first bulk carrier with 98,000 ton loading capacity has been completed at a factory in China 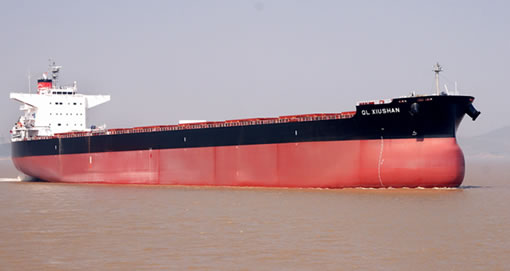 The “TESS98” is a bulk carrier series with a 98,000 ton capacity, the latest model in our “TESS”*1 series, developed as a post-PANAMAX bulker in 2008. The total length of “TESS98” was set to About 235 meters to increase loading capacity, although most ships of the former type have about a 90,000 ton capacity and a length of About 240 meters. Although the length was increased and loading capacity expanded to nearly 100,000 tons, the size still allows the ships to enter major Japanese ports for coal transportation. Reflecting owners needs, this ship model attains broad utility and great usability by increasing the ship body’s strength, so that even high density material such as iron ore can be loaded into alternating cargo holds.*2 This ship model can satisfy the expanding need for transport of coal and iron ore to developing countries where power demand and crude steel production are rising, such as China and India, as well as transporting coals to domestic power plants. In addition, this model introduces a specially shaped bow which reduces wave resistance for efficient navigation even in rough weather, and specially shaped crew’s quarter which reduces air resistance, developed with Hiroshima University. With these innovations, power efficiency has been improved with daily fuel consumption of about 44.4 tons.

The second is the introduction of an automatic ballast water drain monitoring system (ADS). Ballast tanks typically have only one pipe to remove ballast water. But this system includes an additional small diameter pipe. When the water in the tank drops to a certain level, a warning alerts the crew, and by switching to the small diameter pipe lower level water can be drained. Compared to the former model, the water remaining after draining can be reduced by about 240 tons, allowing the same weight of additional cargo can be loaded. Also, by enhancing the drain pump performance and using the small diameter pipe at the same time, ballast water can be drain within 10 hours. This feature reduces stay time at port and contributes to overall improvements in transportation efficiency.

TZS, which built the first TESS98 series ship, is a shipbuilding company in China established by Tsuneishi Shipbuilding Company in 2003. At first, TZS started production of blocks for large vessels for Tsuneishi Factory. In 2007, it started building its first ship and in November 2010, it had completed 50 ships in total since the company establishment. The company’s shipbuilding efforts are progressing smoothly.